Ann Fenech is a shareholder and a Director of Fenlex Group of Companies.  She is also a Partner at Fenech & Fenech Advocates and heads its Marine Litigation Department.  Before joining the firm, she worked with law firms in London and in New Orleans.  She deals exclusively with ship related issues, having experience in disputes ranging from ship building contracts to collisions, salvage operations and towage. Dr. Fenech lectures at the University of Malta and the International Maritime Law Institute and is a regular guest speaker at overseas maritime fora. She is the President of the Malta Maritime Law Association.  In 2012, 2014 and 2015 she was awarded Best in Shipping Law at the European Women in Business Law Awards held in London. She is regularly ranked in publications such as Chambers Europe, Legal 500 and Who’s Who; Shipping. In 2013 she was appointed Honorary Patron of the Malta Law Academy. In 2014 she was the first Maltese to be elected to the Executive Council of the Comité Maritime International. In 2015 she was appointed on the Malta Maritime Forum Board of Directors and in 2016 she was also appointed to represent the Malta Maritime Law Association on the board of the Malta Marittima Agency.  In 2017 she was elected to serve a second term on the Executive Council of the Comité Maritime International.  She is currently the Chair of the International Working Group on Ship Finance Security Practices and a member on the International Working Group on Illegal Arrest. 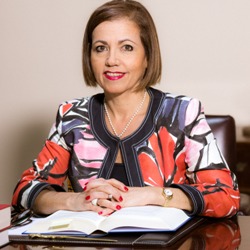